Pomsky puppies have become something of a sensation online. For people who have long adored the Siberian Husky, and yet their large size and endless energy, a dog which looks like a Husky pup all its life is irresistible. Adding to that, Pomeranian Husky babies are the most heart melting creatures in existence. They are little more than a ball of soft fluff and have the capacity to endear themselves to the most hard-hearted dog haters. Like many designer dogs before them, the Pomsky became popular overnight as their pictures and videos hit the net. Suddenly there were stories of Pomsky puppies everywhere. No one had realized how well-received this crossbreed would be.

Pomsky puppies have become something of a sensation online. For people who have long adored the Siberian Husky, and yet rued their large size and endless energy, a dog which looks like a Husky pup all its life is irresistible. Adding to that, Pomeranian Husky babies are the most heart melting creatures in existence. They are little more than a ball of soft fluff and have the capacity to endear themselves to the most hard-hearted dog haters. Like many designer dogs before them, the Pomsky became popular overnight as their pictures and videos hit the net. Suddenly there were stories of Pomsky puppies everywhere. No one had realized how well-received this crossbreed would be. 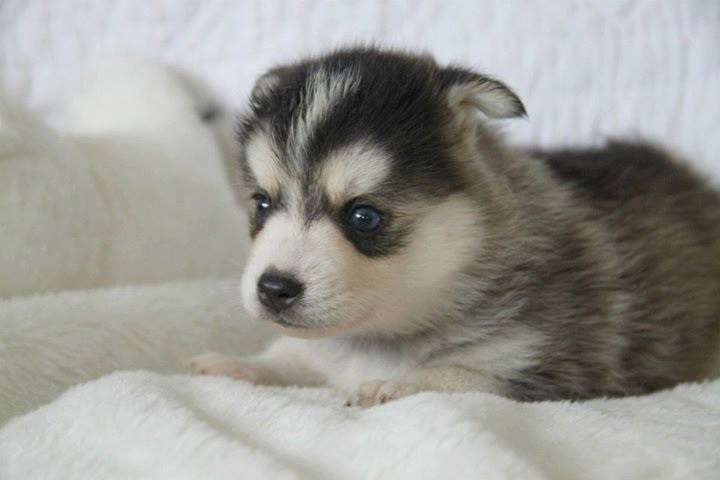 Why Pomsky so popular?

Pomeranian Husky babies are instant heart stealers. A lot of first time owners take one look at them and fall in love, but many long-time dog owners also see the appeal of the smallish cross breed. While usually mixed breeds get a bad rap, the appearance and general temperament of the Pomsky sets them apart. Designer mixes like the Pomsky and Labradoodle sometimes take the dog world by storm. People predict that the novelty would fade, but new crossbreeds like the Labradoodle find a place for themselves as companions and guide dogs, making them valuable on their own merit.

The Pomsky is mainly coasting on popularity for two reasons. Their pocket-sized bodies, with the priceless mixing of a Pom and Husky’s looks, and their playful, energetic temperament. 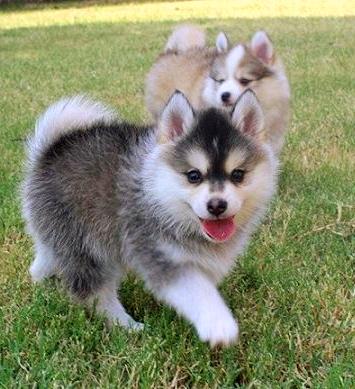 Pomskies have inherited the wonderful coats of their parents, who are both descendants of sled dogs. Some Pomskies have the distinctive puffed look of a Pom, coupled with the markings and colorings of a Siberian Husky. Others have the Husky’s face, with the recognizable wolf-like gaze, but with a Pomeranian’s fluffy tail and miniature size. While Poms come in all sorts of coloring, the Husky has a certain distinctive pattern. They usually come in a combination with white: black and white, copper and white, grey and white, etc. Occasionally, a Husky can be pure white or blonde. When these shades appear on a Pomsky, along with the famous Husky face markings, it has a tremendous effect on dog lovers.

There is also a special coat coloring that has recently gained some popularity: the merle patterns. These are mottled blueish patches on an otherwise white coat and give the dog a scamp-like look. Breeders of Poms develop these markings more often than those who specialize in Huskies. The AKC doesn’t accept the merle coloring in the Siberian sled dog breed. On the Pomsky, which doesn’t have breed standards to adhere to, breeders try and develop those markings, knowing that they’ll be the most sought after puppies.

Where can one buy Pomsky babies? 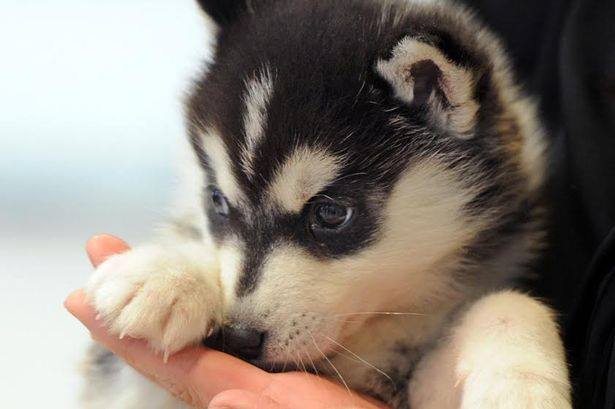 Unlike many purebred puppies, Pomskies can’t be easily located in the nearest pet store. There may not be breeders of Pomskies in your locality or even in your state. For people who are set on buying a Pomsky, it’s best to take the time to find a breeder who specializes in the crossbreed. You may find some listings of people selling Pomskies along with other puppies, but be warned that these are always puppy mill owners.

They purchase dogs of a popular bloodline and breed them indiscriminately, culling the ones who aren’t born with the looks they want and regularly compromising on the health and care of the mother and the litter to save money. Buying from such breeders will only get you a puppy with severe behavioral issues, illness, or genetic disorders. Every purchase fuels their business. They also don’t have the expertise to breed dogs with their health and suitability in mind. They inevitably have poor quality of puppies and focus primarily on the appearance of the Pomsky babies over all else.

The best way to locate reliable Pomsky breeders who are professionals is to speak with the local veterinarians and dog trainers. Ask them for suggestions. This ties their own reputation to the trustworthiness of the breeder. If the breeder lives quite a distance away, take some time on a weekend and visit their facility. Don’t have the puppy shipped without ever meeting them in person and checking out the place where they had spent the first months of their life. This gives the buyer a god idea about the kind of care the puppy received and prepares them for any future issues that might crop up in the puppy’s health or behavior.

Why are the Pomsky so expensive? 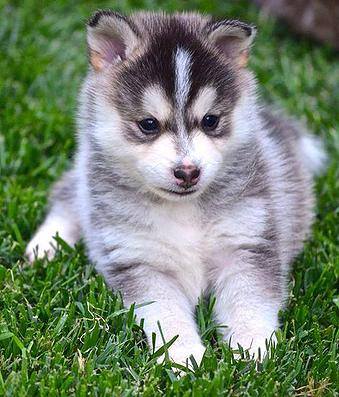 Pomskies were originally the result of accidental mating between a Siberian Husky and a Pomeranian. There are many such mixes in the world and none of them gain distinction until a sudden popularity elevates them above the rest of the mutts. Pomeranian Husky mixes are now known as “designer dogs,” which is just a fancy name for a crossbreed or a mix. Instead of remaining an accident of nature, they are being deliberately bred by professional breeders in response to the rising demand by dog lovers.

Crossbreeding isn’t a popular specialization in the dog handling world. There are those who believe it dilutes bloodlines and gives birth to new disorders since the science of cross breeding in canines hasn’t been well studied. Unlike in cattle – where crossbreeding is done frequently to keep the animals in good health – dogs have spent the last several hundred years segregated into breeds, with fierce proponents refusing to mix blood for fear that they would lose the look or character of their preferred breed. The result is a few hundred dog breeds, each with their own disorders and hereditary genetic diseases.

Therefore, with less knowledge and a lot more risk, Pomsky breeders buck convention to develop litters of designer puppies, with any guarantee that the dogs would grow up to look like their predecessors. The process of genetics which gives us similar looking dogs from pure bred lines, takes hundreds of years to set. A new breed like the Pomsky comes with its own problems of health and temperament which breeders must handle while investing in the care of the dogs who are their livelihood. Sometimes, it takes years for the breeders to gain a return on the money they put into developing litters of quality Pomsky babies. This is counted into the price that they finally set on each puppy. A Pomsky today can cost anything between $1000 to $3000. If the buyer wants the first pick of the litter or a special coloring, they may have to fork over $5000 or more.

Watch the Pomsky puppies in this video: